Zoe adores Somatic movement and also Feldenkrais and blends these styles with mindfulness into her two very relaxing lessons on Monday evenings and Friday mornings mornings.  See the Classes and Workshops page for details.

So, what is it, then?  Gentle Somatic Yoga is a form of movement which asks practitioners to sense and feel the movements they are performing.  The Somatic Movement Flows® that comprise Gentle Somatic Yoga are designed to provide sensorimotor feedback to the brain.  Through relaxing self performed body scans and comparing and contrasting the body after movements, the practitioner gets the brain to notice where muscles are chronically contracted and assist in regaining control of those muscles, allowing them to release.  The result is more freedom of movemen with a vast reduction or complete elimination of pain and stiffness.

In classes slow and mindful movements are practiced, and we use a technique known as pandiculation to consciously contract and then release the target muscles.  Pandiculation is not stretching. Pandiculation is achieved by the mindful choice to engage a specific muscle group. Once the muscle group is sufficiently loaded, then we use body’s weight in combination with the natural force of gravity as information of how to slowly and smoothly disengage the same muscle group. Once this muscle group has reached its fullest range of motion without pain or strain, then we release all muscular effort before moving on to the next repetition. This conscious process helps to re-pattern and strengthen the brain-to-muscle connection so that we can regain voluntary control of our physiology (self-healing). It also resets the muscle to a longer and more optimal length when it is in a resting position. Thus, a person maintains better flexibility, strength, and coordination. This can also be called neuromuscular re-education.

In our practice of Somatics and Gentle Somatic Yoga we are asked to gain awareness of our habitual movement patterns that have resulted in chronically contracted muscles manifesting in the pain and stiffness we often endure.

The practice of Gentle Somatic Yoga is very relaxing for both the body and the mind.  Practitioners report leavng class feeling relaxed and “reset” and ready to face the world.  It is a great companion to other forms of movement and exercise – as well as daily activities.

Check out the below free class… 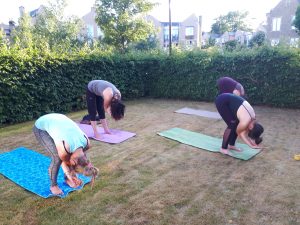